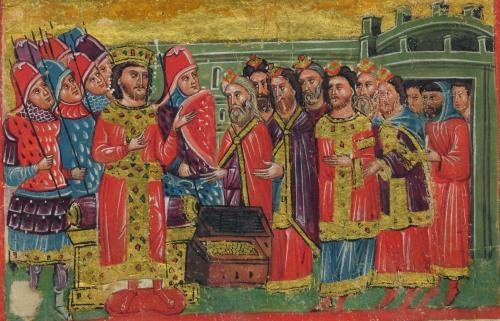 A fourteenth-century miniature Greek manuscript depicting scenes from the life of Alexander the Great. The priests of the Jews (Rabbis) offer Alexander the Great Gold and Silver, Alexander spent the gifts of the Rabbi’s on his Gods. The whole scene is depicted entirely in Byzantine fashion of the late Byzantine period (1204-1453). Alexander the Great is depicted as a Byzantine Emperor (Basileus) and his troops are depicted as Byzantine-Greek soldiers of the 14th century. The Jewish Rabbis (standing to the right) are shown wearing distinctive ceremonial robes and small caps on their heads. From the “Alexander Romance” in S. Giorgio dei Greci in Venice.
Anonymous, [Public domain], via Wikimedia Commons

Geographical Scope
Global
Chronological Scope
400-1800; works crossing these boundaries may be considered if appropriate to the aims of the series
Editorial Board

Much of Jewish culture and history has been informed by the relationship Jews had with members of other religious communities. This series welcomes monographs and article collections on all aspects of Jewish culture but most especially encourages contributions which focus on Jewish religious, social, literary, scientific, and artistic relations with non-Jews from late antiquity to the early modern period.

The series is intended to encompass not only Western Europe, but also Byzantium, the Caucasus, Russia, the Middle East, and Persianate world, all regions of Asia, Africa, especially Ethiopia, and the Americas. In addition, the series will consider works which address instances of invented or adopted Jewish identity, or imagined Jews. 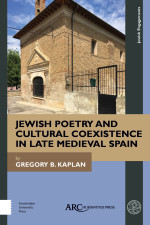