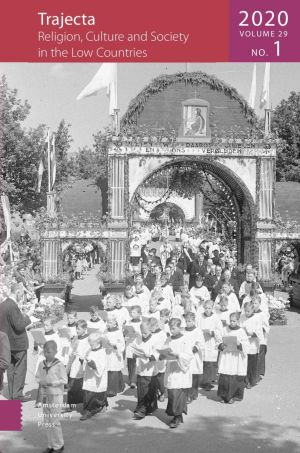 Trajecta. Religion, Culture and Society in the Low Countries

Trajecta is published in cooperation with KADOC-KU Leuven, Documentation and Research Centre on Religion, Culture and Society, HDC Centre for Religious History at the Vrije Universiteit Amsterdam, the Catholic Documentation Centre at the Radboud University Nijmegen (KDC) and the Archives and Documentation Centre of the Reformed Churches in the Netherlands at the Theological University Kampen (ADC).

Trajecta. Religion, Culture and Society in the Low Countries is published in two issues per year.

As of 2020, Trajecta. Religion, Culture and Society is published in Diamond Open Access under the Subscribe to Open model. Thanks to the continued support of subscribers and sponsors, all articles are freely accessible under the Creative Commons license: Attribution-Non Commercial-No Derivatives (CC BY-NC-ND 4.0).

Articles on the modern history and heritage of religion, culture and society in the Low Countries can be submitted for publication to the editorial secretary (maximum 7,000 words excl. footnotes). Contributions should preferably be in English; Dutch contributions are also accepted. See the authors’ instructions for more information.
Manuscripts are double-blind peer reviewed by two reviewers. Trajecta aims to be an accessible journal for both an academic and a non-academic public. Every manuscript is assessed for its academic quality as well as its readability for a broader public. Illustrations contribute to a visual attractive publication.

Articles in this journal have Digital Object Identifiers (DOIs), which are registered with CrossRef. The DOI is a unique number that identifies a published article. The DOI provides a link to current information about that article, including where it can be found online, irrespective of any changes in the journal or publishing company website.

For long-term preservation, all issues of this journal are archived at the Dutch National Library and Portico.

Support this Open Access journal by taking out a subscription!

Postage costs (outside of the Netherlands) are not included.