Senior Commissioning Editor Maryse Elliott pays tribute to Professor Thomas Elsaesser who, in his passing, leaves behind a monumental legacy in the field of Film and Media Studies. We at Amsterdam University Press will miss him terribly. 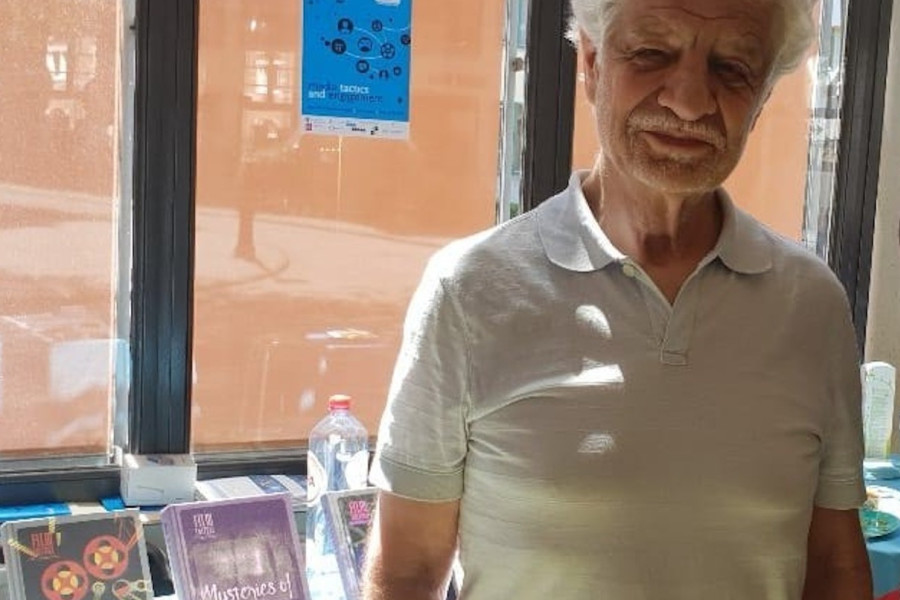 Thomas Elsaesser at AUP's table at the NECS Conference, Amsterdam, 2018.

As for many in the large community of Film and Media Studies, the sudden passing of Professor Thomas Elsaesser on 4 December, came as a shock and with great sadness.

In my role of commissioning editor at Amsterdam University Press, responsible for the Film, Media and Communication Studies portfolio, I had the immense privilege to work closely with Thomas Elsaesser as editor of the book series Film Culture in Transition.

Among his endless and remarkable scholarly achievements in the field of Film and Media studies, Thomas was most instrumental in setting up the film studies list for the Press. Starting 25 years ago, with the first book to be published in the series, Writing for the Medium (1994), for which he was one of the editors. Since then, about 150 book proposals have come under consideration for the series and their authors would have to pass Thomas’s critical observation for his praise and approval or they would suffer a tough but still diplomatic rejection.

I started at Amsterdam University Press and worked with Thomas shortly after the publication of his own book Film History as Media Archaeology (2016), which marked the 50th publication in the series. By then, together with the support of my predecessor Jeroen Sondervan, Thomas had shaped a prestigious book series with the best authors in the field and on a wide range of topics ranging from film theory to contemporary Hollywood, television to digital media, European and transnational cinema to media archaeology.

In my 15 years of experience in publishing, Professor Elsaesser was the most committed series editor I have ever met and worked with. Our editorial meetings would always last hours and in need of several cups of coffee, to go through the long list - becoming longer still with every meeting - of all the book projects in the works for the series.

Thomas always made sure that each and every single one of them had his full perusal and he would inquire for the latest updates on those. Even between back-to-back trips to Brazil and New York or Japan and Berlin, Thomas’s incredible energy also showed in his prompt emails to me during those trips, in response to any review report or new book proposal I would send his way.

Thomas’s life-long dedication to film studies was palpable through his work as a series editor and while he was always hoping to receive more book projects “closer to his heart” as he used to say, he never stopped encouraging new authors and being more critical with the more established ones.

I have learned a great deal through his scholarly expertise. He truly was a gentleman and our lengthy and often humorous discussions on cinema, publishing or on all his travels around the world were always a delight.

I will miss him terribly and so will all my colleagues at Amsterdam University Press. RIP Thomas.